Before reading this article please know that:
Alot of the points including longevity that I mention in this article are based on personal experience and discussions with my fellow breeder friends. they are still under research an there is no accredited published article to point you to. Embark Vet explains some part of it, but they are not focused on Doberman.
The COI that I keep mentioning in this article is Genetic COI based on DNA, not based on Pedigree. There are very few breeders breed based on genetic COI a the moment, so you do not find much about it out there. (Please check Embark Vet for more details on genetic COI)

I hope not to mislead you or give you false hope. hopefully in near future we have more info and detail about these that will help the breed. (I Used a lot of HOPE in the sentence for a reason)

Also, Low genetic COI, does not prevent VWD, eye and other diseases in dogs. Over all longevity, less auto immune diseases, and cancer is what I know are affected by low genetic COI. Better bred also has articles on DCM and COI. (I have a DCM article on the site)

Low COI = High Diversity. that means the DNA from Stud (Dad), Mom (Dam) varies. for example, 22% COI means that parent genes passed to the offspring are 78% different. and COI 44% means parents DNA that are genes passed to the offspring are 56% different.  This means there are 2X change ( 22  x 2 = 44) that genes that ae passed to the offspring are the same. Many diseases (known and unknown diseases) require two set of the same gene to be activated. there for owning a 22% COI reduce the chance of a dog getting unknows diseases by half comparing to a 44% COI. Unfortunately, a dog may still be unlucky to receive those genes. Low COI does not guarantee healthiness it improves the chance of being healthy. 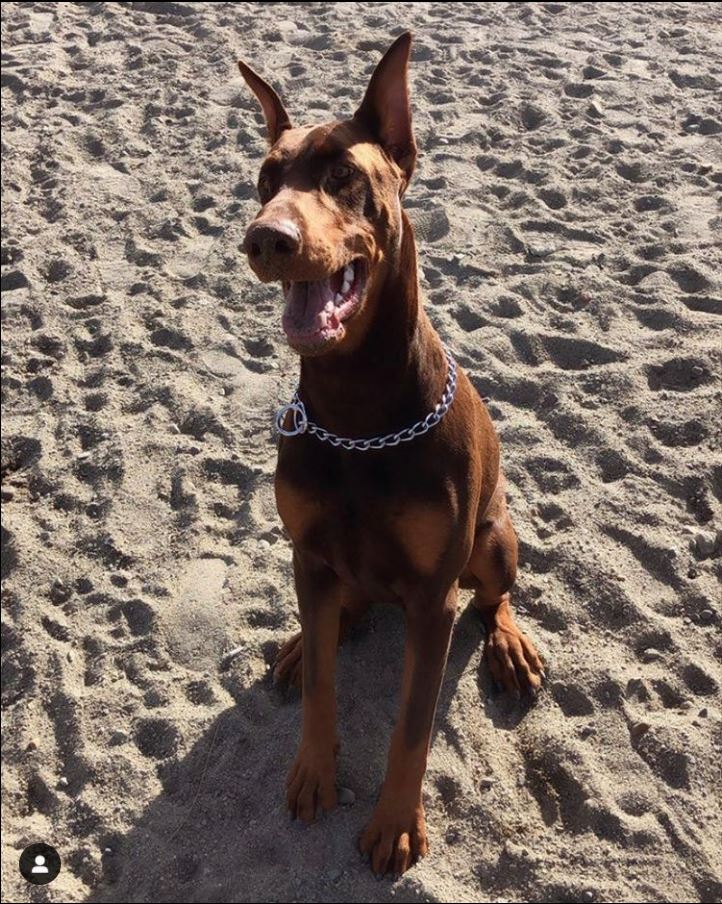 Photo of Goalie. one of our 25% low COI Dobermans.

Our breeding practice is controversial in the Doberman community. Most reputable breeders focus on show and champion Dobermans while we focus on low genetic COI.

At the end it is up to you, to pick the type of dog and breeder that you think will make the best match for you. We do not change our way of business to accommodate individual preferences. If you are looking for show Doberman there are great show breeders out there.

In this article I explain how I decide on breeding Dobermans and If you think my program fits you, feel free to send me a puppy application.

At the time of this writing (Feb 2021), Almost no other breeder is doing my program. and I hope this article introduces you to the breed and its true health issues. Instead of watching many baseless YouTube videos and forums from people with no Doberman or Genetic experience.

Unlike what you read online about Doberman lifespan to be 10 ~ 13 years, most Doberman (95%) on average only lives to approximately 7.5 years. There is no week that I receive a message from a Doberman owner losing their best friend to heart or cancer issues at early ages, from few months to 4 ~ 8 years being the most common.

How does COI play a role in Doberman Longevity?

COI of Coefficient of inbreeding, play an important role in animals’ longevity. Whether it’s a dog, cat, or a human the closer related are the parents the more inherited issues are passed to the offspring. (Consanguinity). Higher COI, will result in shorter lifespan in animals, it also causes earlier cancer and several other diseases.

Pedigree is what shows the parents, and other ancestors of a dog. 3, 4 and 5 generation pedigrees are common form of printed pedigrees. Two major wrong assumption with pedigree is that each child inherits 50% different genes from each parent and that each breeder does a good job at tracking mating and registering the right parents into the pedigree database. (CKC, AKC, FCI and other pedigree systems depending on the region)

Genetic COI is calculated by sequencing DNA of an animal and compare the maternal and paternal part to check how much of the DNA is in common. This ensures that we always get the true value for COI. To give you an example All my dogs will produce 0 ~ 2% COI based on pedigree COI, however calculation it with genetic COI the value is between 25% ~ 50%. This will show you how much discrepancy exist between the two methods of calculation COI. at 50% Genetic COI the parents are as if they are siblings. The lowest genetic COI recorded for a Doberman recorded as of 2020 was 17%.

Life Expectancy Based on Genetic COI

There are no official records out yet about Doberman life expectancy and genetic COI. However, based on what I have seen from many Dobermans in my cycle, these are what you should expect of your dogs’ longevity based on genetic COI. (assuming the dog is healthy and no accidents happens to it)

How to test the Genetic COI in your puppy.

If you are a geek, you can sequence your dog DNA and get the sequence in Plink software. you can then compare maternal and Paternal sides of DNA to see how much is in common.  I am a software developer and data analyst and I love to play with data.

The easy way is to purchase a health DNA test kit from embark vet. they provide you with that information.

What Do we Mean by Average Litter Genetic COI?

based on parents genetic we estimate what will be the average for litter. (Embark provide a tool to do so as well). any COI that I list for puppies is based on embark so they can be verified if needed.

When I market a litter as 25% COI, that mean puppies COI could range (+/- 7 point) from 18% ~ 32%. however, most of the litter will be around 25% with a little variation between each puppy. If i were to DNA test them before i send them home, I wouldn’t get their exact COI result before they are 5 ~ 6 months of age, and i hope them to find a home when they are younger. 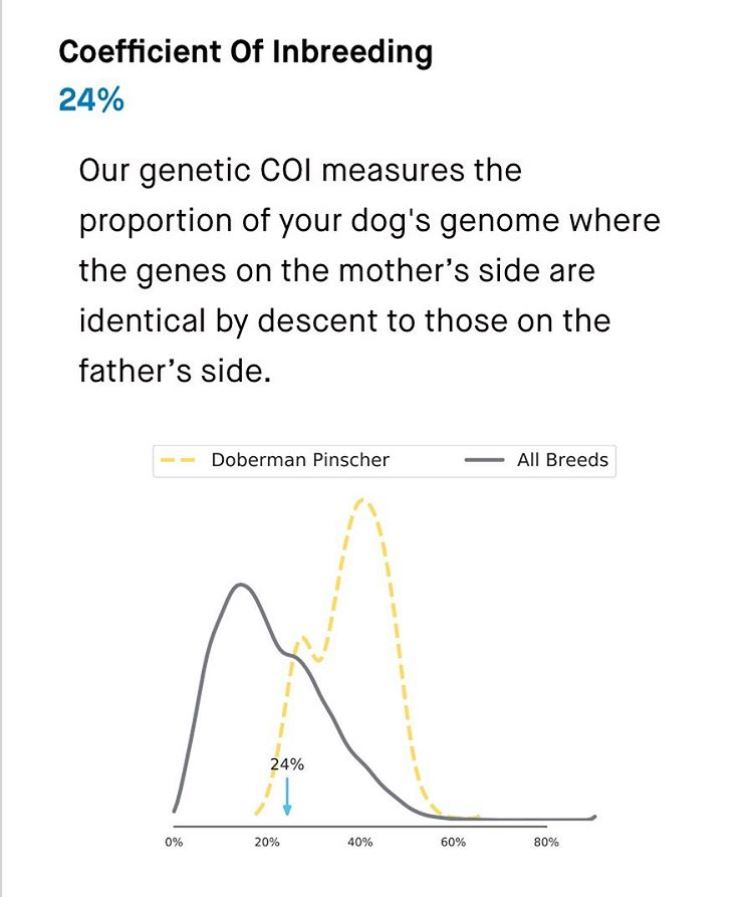 24% on the graph is from sequencing our own bred puppy. Compared against Doberman average COI.

Average genetic COI for Dobermans is between 40% ~ 45% based on over 5000 Doberman DNA sequenced. it goes up and down as Embark sequences more Dobermans. it is usually around 43%. and the lowest one was around 17 ~ 18%.

This graph shows you Doberman COI graph vs average for other breeds. Most mix breed dogs are less than 10% in COI and most purebred dogs are above 15%.

What Is Wrong with Champion Dogs?

The purpose of inbreeding dogs is to enhance a feature in them, features such as (look, conformation, drive, sport, etc).

The genetic pool for most purebred dogs, especially Dobermans is getting smaller and smaller, which brings the COI higher after several generations. This will lead to shorter lifespan and more diseases in the long run.

My goal is to breed for COI of at-least 20% less than average for Dobermans. I rarely have average Doberman COI, unless I found two dogs exceptionally good.
Breeding Low COI, is more difficult than average Doberman COI, because I need to test many dogs in order to be able to find a pair that will produce healthy puppies with good temperament, good look that also are distant apart when it comes to their ancestors. That is also reflected in our pricing and why our lower COI puppies are more expensive.
I personally believe many diseases such as DCM and Cancer will have a lower chance of occurrence in low COI dogs or these diseases are delayed to a later age when dog has a low COI and high diversity.

I always speak about this publicly and advocate about it on social media. hopefully it gets the attention of more people and breeders. I breed based on my own plans for COI and for people that understand the importance of COI, if you are looking for different breeding practice or owning a champion dog is number one priority to you, I am probably not your breeder. You have many other choices out there. 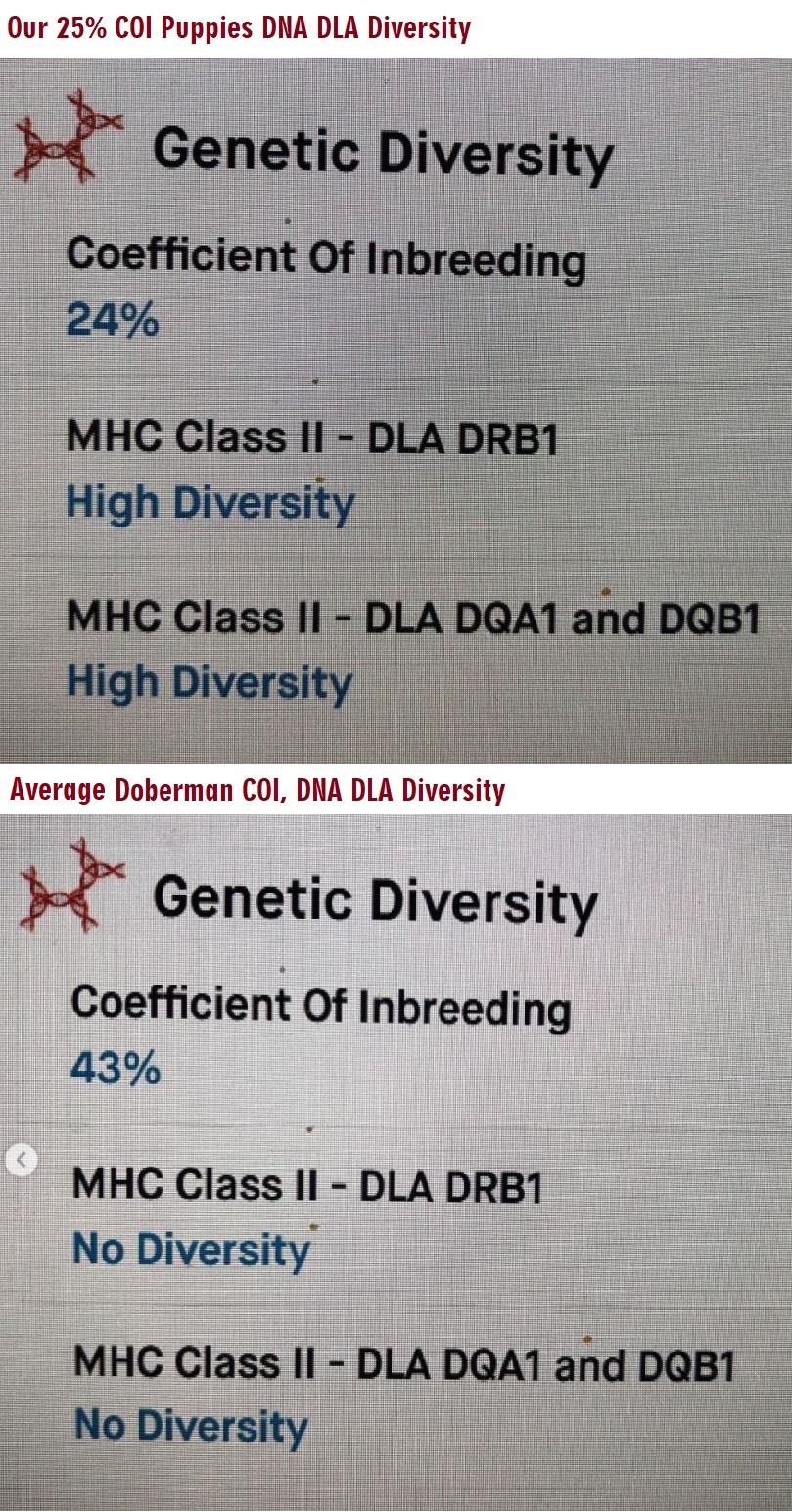 Please also watch the video below which explains the genetic COI from Embark scientist.

To the Betterment of Dobermans

If you have any questions please do not hesitate TO message me.

We are a hobby kennel. We don't accept walk-ins.